Patty Sanphy has devoted her life to making music since first learning to sing at her Daddy’s knee.  She earned her degree in jazz guitar in college while gigging in a local Philadelphia blues band.   In 1997 she founded the Tampa Bay Women’s Blues Revue, a  regional act popular around the Florida scene for a decade.  Her guitar style swings from George Benson to B.B. King, and her warm alto voice covers Diana Krall, Bonnie Raitt, Etta James, and many others.  Performing nowadays as a solo artist, Patty continues to demonstrate her considerable command of both guitar and voice throughout the Tampa Bay region, bringing Jazz & Blues to Soothe your Soul to one and all! 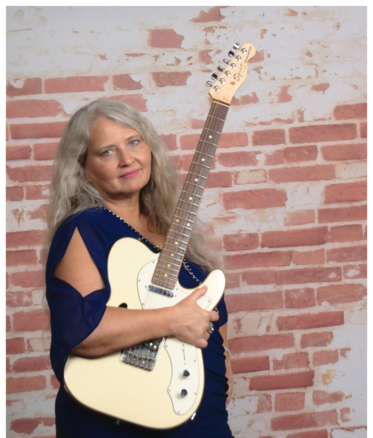 Patty Sanphy has spent her lifetime devoted to music.  She learned to sing at her daddy’s knee, in a big Irish American family in Bucks County PA.  She loved the Big Band sound on her parents records.  And she listened to Motown, Pop, and Soul music on the radio.  At 16, she picked up the guitar and started performing in a folk group.  She took her degree in Jazz Guitar while gigging in a popular local Philadelphia Blues Rock band.

In 1985 Patty moved to Pinellas County Fl to be closer to her parents.  She continued her studies on guitar,  and performed with her duo, Easy Street.   She also began to teach music at Country Day Academy in Largo, and to build a successful private teaching practice.

Patty has had numerous successful musical projects and collaborations in the Tampa Bay region over three decades.  Her own projects included The Patty Sanphy Group, Swing Sisters, The Women’s Blues Review, and Equinox jazz duo.  She has had the honor of  working with the areas best and brightest, and she continues to learn from these mentors.

In 2002 Patty released her CD with her Women’s Blues Review project, and the band was a mainstay on the regional scene for a decade.  Patty currently performs jazz and blues as a solo artist at various area restaurants. She resides in Largo, where she tries to instill her love of music in her students.

Jazz and Blues to Soothe Your Soul